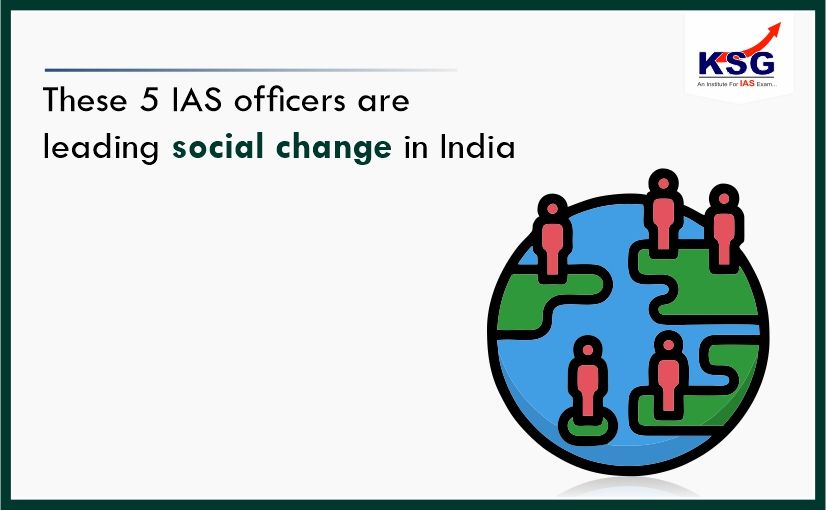 Joining the Indian Civil Services is the dreams come true for the Indian youth. The major of all the reasons is civil services provide many direct and indirect allowances. These include social status and  job security, and also a chance to work for society.

Civil servants and IAS officers not only help the government to formulate and implement policies, but many of them go beyond the call of their duty and take part in various measures to improve society and provide a livelihood.

We are going to present here the inspirational stories of 5 IAS who play a key role in changing the social picture of India.

Indian Administrative Service (IAS) officer Tukaram Munde has been handed several transfers due to his devotion to his 13 years of service and duty. The IAS officer of 2005 batch, is currently a commissioner in the Nasik Municipal Corporation.

From raiding an illegal bar to the demolition of unauthorized encroachments and taking firm action against land and water mafias, Munde has done it all. He even received death threats for taking action against the sand mafia, and near to suspend for resenting his political bosses. Munde believes that he has all the qualities of being a leader, a transformer and a change maker.

Popularized as 'Miracle Man' in Manipur, IAS officer Armstrong Pame's first claim to fame came when a 100-km-long road was built in the state in 2012, without the government's help.

In August 2012, he raised Rs 40 lakh for this purpose through the Facebook page. He was invited to the Facebook headquarters in California, USA, for his efforts in road construction with donations and volunteers.

In remote areas of Manipur, two villages of Tessam and Tamenglong were inaccessible as there were no roads. Connectivity of the two villages was a major problem and locals either had to walk for hours or swim across the river.

Today, this 100-kilometer road is known as the Peoples Road, and the entire credit for its construction goes to Armstrong. The road also connects Manipur to the states of Assam and Nagaland. His recent initiatives include inviting weekly dinners to class 5 to 10 students to give them glimpses of the life of an IAS officer.

In 2012, Armstrong was nominated for the CNN-IBN Indian of the Year Award in the Public Service category. He was awarded India's most prestigious IAS officer award in 2015. In the same year, Pame was invited as the 'hero' of the 9th episode of Bollywood's megastar Amitabh Bachchan's talk show 'Aaj Ki Raat Hai Zindagi'.

DC Rajappa, a firm believer in community-friendly policing, is a well-known name among the promoters of Karnataka law. He is also a noted Kannada poet and believes that sympathy is a guiding force for both poets and policemen. He encourages policemen to write poems from their personal experiences and has brought out the poet hidden among 500 policemen in Karnataka.

To bring out the literary talent and poetic sensations between men and women in uniform, Rajappa has edited four editions of a compilation of poems written by policemen of all ranks - from constables to inspector generals.

In his 28 years of police service, Rajappa has worked across Karnataka. He has served as a police officer in various postings including Railways, CID and DCP West in Bidar, Sagar, Mangaluru, Gulbarga, Shimoga, Bellary, Bijapur, and Bengaluru.

Aparajita Rai was 8 years old when her father, a divisional forest officer in Sikkim, died. Then at a young age, she understood how insensitive most government officials were to the public. This was when she decided to be part of the system and joined to bring about change. She is now the first woman IPS officer of Sikkim.

Realizing the importance of educating children for the bright future of the country, this IPS officer take time off from his duty and work towards improving the state of education. Santosh Kumar Mishra, a resident of Patna, is a 2012 batch IPS officer and is currently posted as SSP in the Etawah district of Uttar Pradesh.

While he was posted in Amroha district, a class 5 student once complained about his friend not coming to school for the last 15 days. Seeing the child's worried face, Santhosh decides to investigate and realizes that the boy had started helping his father's dessert business. Santosh then spoke to the father and encouraged the child to go school again. This prompted him to start his work to improve the state of education in India.