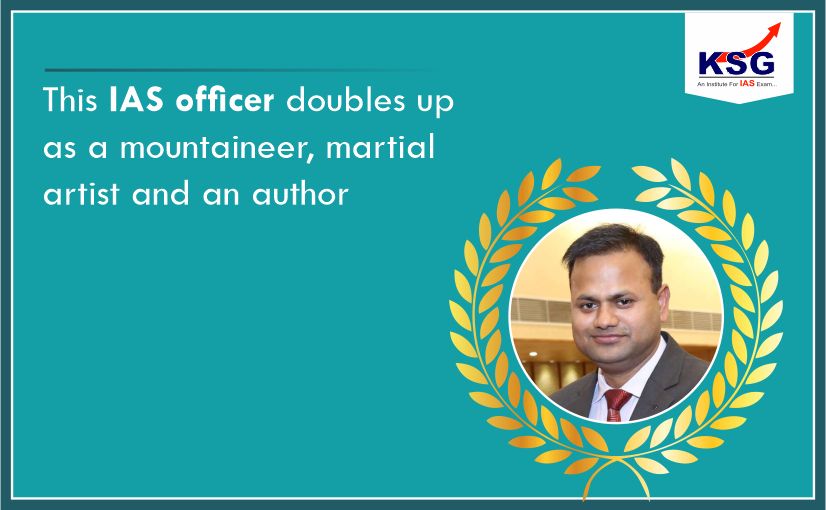 Meet This Multi Talented IAS Officer Who is a Mountaineer, Martial Artist and an Author

For the IAS aspirants, this is a remarkable story of an ordinary person like you and me. An IAS officer always forms an image of a real-life hero just like that Bollywood reel life heroes in "Singham" and "Dabangg". But can you imagine that an IAS officer is a mountaineer, an author, and a martial artist?  Not only is this true but he is also an adventure junkie. We're talking about 37 years old, Ravindra Kumar from Bihar.

It's a usual tendency that an IAS officer spends most of the hours sitting indoors entangled with many files, a boring, and strict personality. Ravindra Kumar has changed this mentality going out of the four walls of his office. He was an ex-seafarer, adventure lover, writer, and expert in martial arts. He is the first to climb Mt. Everest amongst the IAS community.

Talking about the early life of Ravindra, he belongs to a farmer family in Begusarai, Bihar. Begusarai was not so developed district of Bihar to give ample opportunities to Ravindra. Moreover, his father's financial limitations also didn't allow him to see big dreams. Despite all odds, he managed to crack the IIT entrance exam in his first attempt. Within a few years, he also cleared the civil services examination which is considered as one of the most difficult examinations of India.

When he conquered Mt. Everest, he said that his father had supported him a lot and struggled to bear his educational expenses. To share his experience about the journey of reaching the top of the world, he wrote a book titled " Many Everests". He explained a technique to stay positive in tough times of life inspired by his own life. He gave it the name "Advanced Positive Visualization". This technique explains the power of the human mind to achieve any kind of goal. His idea behind writing a book is to motivate others to achieve their dreams and goals.

How He Has Inspired To Be an IAS

When asked why he chose to be an IAS officer, he answered that he was inspired by his uncle Mr Shyam Prasad to join the civil services as he was an IPS officer. He wanted to serve his country and make changes that he wanted to see. Becoming an IAS officer is like a childhood dream come true for him.

He started from Sikkim cadre as his training period. Then he worked as a 'Sub-divisional Magistrate', SDM in different parts of Sikkim State. In his career, Ravindra has held and worked on many designations which include - Director of Indian Himalayan Centre for Adventure and Ecotourism (IHCAE), Chief Development Officer (CDO) of Sitapur District in Uttar Pradesh, and Commissioner of Entertainment Tax.

Looking at his excellent career performance in Sikkim and Uttar Pradesh, Ravindra Kumar was appointed as the private secretary of Uma Bharti when she was Minister of Drinking Water and Sanitation. He won loads of accolades and accomplishments. He has been awarded the Sikkim Khel Ratna Award by the Government of Sikkim, and the Vishesh Khel Samman by the Government of Bihar.

While his tenure in Sikkim, Ravindra came to know that Sikkim is an earthquake-prone zone. He then decided to learn mountaineering to help people get out of the rubble created after-earthquake occur. Recollecting the fact, he told that he had learned mountaineering for lending his helping hand to victims and hence joined the course at Himalayan Mountaineering Institute in Darjeeling. Ravindra was always committed to his dreams and goals and hence developed the caliber to jump the highest mountain peak in the world. He said, "I began preparing myself both mentally and physically to scale the peak. A lot of people suggested that climbing Everest first could be very risky and asked me to try ascending smaller peaks instead. But I stuck to my guns."

He took intensive training of mountaineering and finally 19th May 2013 is the date on which he reached the highest peak of Mt. Everest. This was a historical event where for the first time an IAS officer had climbed Mt. Everest.

Ravindra sharing the secret of his rare personality says that he believes in three words for attaining goals with flying colours i.e. Conceive, Believe, and Achieve. He says, "Conceiving big dreams is important, but working hard enough to believe in oneself is even more important to achieve and realise the dream."

Ravindra is not just interested in mountaineering, but he loves to take part in all types of adventures like scuba diving, underwater adventures, bungee jumping, horse riding, etc. He is one of the rare personalities who are multi-tasking and multi-faceted. You will be surprised to know that he has also gained a black-belt in Karate and hence can professionally defend and combat.