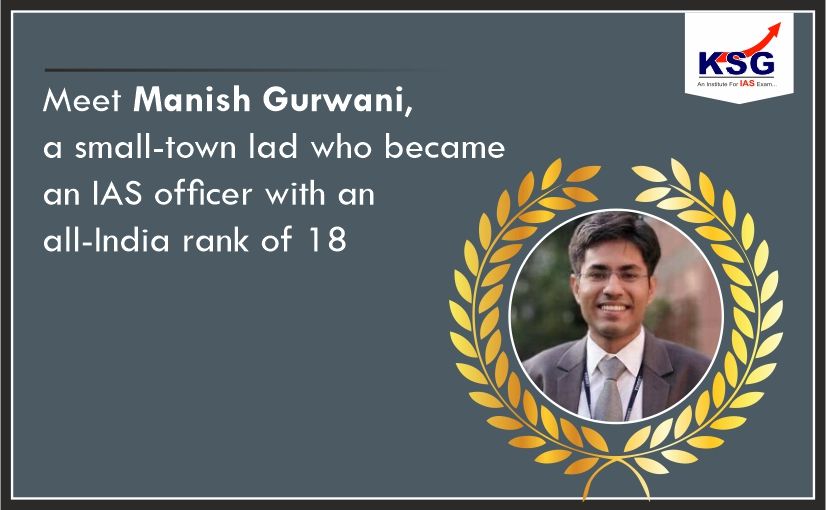 Manish Gurwani, a small-town lad of Hanumangarh district of Rajasthan has became an IAS officer with an all-India rank of 18. Know his success story from being a normal guy to becoming an IAS officer will surely motivate you.

Described by torrid warmth waves, spouting breezes, and twisting rises of sand, Nohar is an interesting town situated in the Hanumangarh area of Rajasthan. Manish Gurwani was brought up in this very district before turning into an IAS official and holding the most elevated position in the Civil Services Exam. Manish, 27, was much the same as some other fellow while he was at school with eyes overflowing with excitement and heart flooding with enthusiasm. However, the aspect that set him apart was his conviction to add to the welfare of the general public.

It is said that each disaster is to be overwhelmed by continuance. What's more, Manish proceeded to do only that. Since Nohar didn't have any organization where the mode of guidance was English, he had no real option except to consider in a Hindi-medium school until Class 10th. Despite all odds, he stayed focused and began learning English. The difficulties didn't end there. Throughout his childhood, Manish's mom remained sick as she suffered with a bad health. In spite of that, he continued making progress in his life.

Manish’s hardwork and determination drove him to accomplish an All India Rank of 18 in the 2017 Union Public Service Commission (UPSC) exam.

After achieving this accomplishment, Manish got training at Mussoorie before being promoted as an Assistant Secretary, Ministry of Commerce, Government of India.

What Makes Him Different From Others

He is an extraordinary boy that dreams a lot, has faith in himself to achieve success. Manish was born in a middle class family in the Land of Colors, Rajasthan. His father, PitamberLal, is an Ayurvedic doctor working with the Government of India, and his mom, Gopi Chandani, is an educator in a government school. Manish studied at a Hindi-medium school called KDP Secondary School in Nohar.  He then went on to pursue Class XI and XII from a coaching centre in Sikar in the form of homeschooling. The turning point came about in 2008 when he got an admission for a dual degree programme in BITS Pilani.

Another factor that shaped Manish’s thoughts was his stint with the National Service Scheme (NSS), the government-sponsored public service programme conducted by the Ministry of Youth Affairs and Sports, Government of India. All the students at BITS had an option to volunteer as part of this scheme. And, Manish was more than happy to take up the role.

He stepped ahead to organise several cloth donation drives, health, and blood camps in rural Rajasthan. That was not all. He also took to teaching subjects like Mathematics, English, and Science to all the children of staff members working in the college canteen after classes.

Role of IES and GATE in His Life

He took up the Indian Engineering Service as well as the Graduate Aptitude Test in Engineering (GATE) exam before commencing his IAS venture. The first occasion when he attempted the UPSC exam, Manish secured the 322nd position and was offered a position in the Indian Revenue Services. However, while working in the revenue department he kept preparing rigorously to write the exam again. Manish’s efforts paid off in 2016 when he obtained an All India Rank (AIR) of 18.

Manish had a strategy in place to crack the UPSC right from the beginning. Among the many competitive exams in India, the civil services examination is considered to be one of the toughest to clear. Manish has thus proved that hard work always pays off and it’s not dependent on circumstances. All one needs is keeping faith in the most important ability. His success story is a shining example of pure determination, dedication, and focused approach.