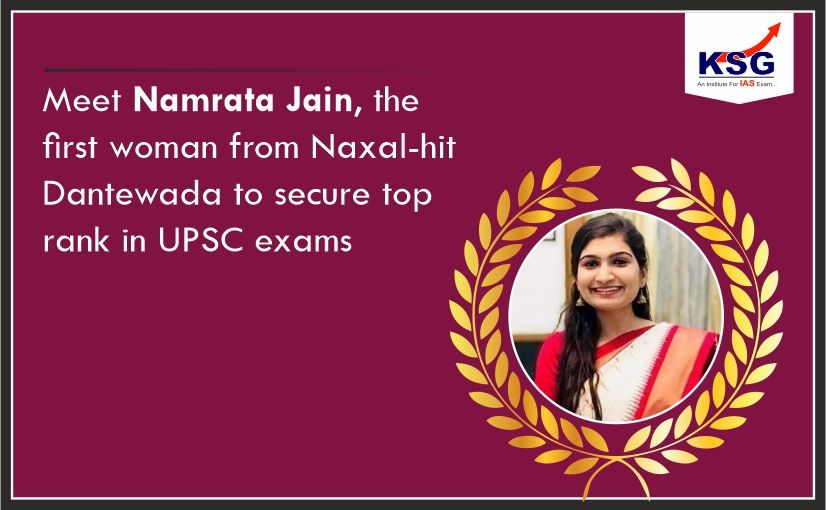 Namrata Jain a 25 year old woman, who hails from Geedam town in Dantewada, is the first woman from Naxal-hit Dantewada to secure the top rank (All India Rank 12) in UPSC exams. Her mool matra to top UPSC exam was ‘Dedication, Perseverance, Commitment, Hard Work, Balance, Belief, Focus, Failure and Learning’ that add to her story in the massive successful way.

Namrata cleared UPSC CSE Exam in her 2nd attempt and got the 99th Rank (AIR). In a leading daily, Namrata told, she got the 12th rank in her 3rd attempt in the Civil Services exam, which was declared by the Union Public Service Commission (UPSC). She added that she was from Geedam town in Dantewada, ranked 99th in the year 2016 in Civil Services exam. Later on she worked hard, and attempted the UPSC IAS exam once again and achieved AIR 12. She was allocated Indian Police Service (IPS) in 2016 and was trained at Sardar Vallabhbhai Patel National Police Academy in Hyderabad.

She added further “I always desired and wanted to be a collector. When I was in 8th Standard, a woman officer had come to my school. I was very much impressed with her personality and the confidence she had worn on her face expressed her glory of success”.

Tacking Violence In The Region Motivates Me To Stay Strong

Despite the fact that the family hails from Rajasthan, Namrata's grandfather moved to Bastar over fifty years back and they have been living in Dantewada since then. Her father, Jhanwarlal Jain, is a businessman while her mother, Kiran Jain, is a homemaker.

In spite of the limitations she faced in terms of opportunities, when it came to preparation for the UPSC exams, Namrata did not yield and found shelter on online platforms to help her understand the concepts and turn her fantasy about becoming a public servsant and help her home state, Chhattisgarh.

From the young age of 10, she has been a close witness to many violent incidents. In 2004, a Maoist assault left a police headquarter burned to the ground and slaughtered 11 cops. Sickened and crushed by the size of viciousness, Namrata pledged to accomplish something for her hardship torn town. At this point when she was in the eighth grade Namrata was acquainted with a regional authority who visited her school. Captivated by the gathering, she enquired about the profession from her dad.

Namrata also said, one day I saw the Naxal-triggered blast that hit the police station in my home town a long time ago. It encouraged and motivated me to join the civil services to help the poor and bring the surrounding of development to the Maoist-affected area.

Namrata was plainly dazzled and this established the framework for all the difficult work she would be placed in throughout the years to satisfy her fantasy about being a government servant.

The Second Attempt Was Not Easy for Her

After doing graduation from Bhilai Institute of Technology, Namrata moved to Delhi to get ready for her CSE exam.

While concentrating in Delhi, Namrata got comfortable with the structure of the educational plan and furthermore figured out how to adopt an organized and trained strategy towards her preparation. In 2015 she didn’t clear the exam and she moved back to Dantewada to proceed with her arrangements there. She started preparing for the UPSC CSE from a Coaching Centre run by the Dantewada area organization. In 2016, she remained at the 99th position out of 1099 applicants. In any case, Namrata stayed firm in her determination to improve her rank so that she could join the IAS. She started getting ready genuinely the third time around, taking the assistance of online coaching platforms.

The civil services exam is conducted every year by the UPSC in three phases —Preliminary, Mains, and Interview — to choose officials for Indian Administrative Service (IAS) , Indian Foreign Service (IFS) and Indian Police Service (IPS) among others.