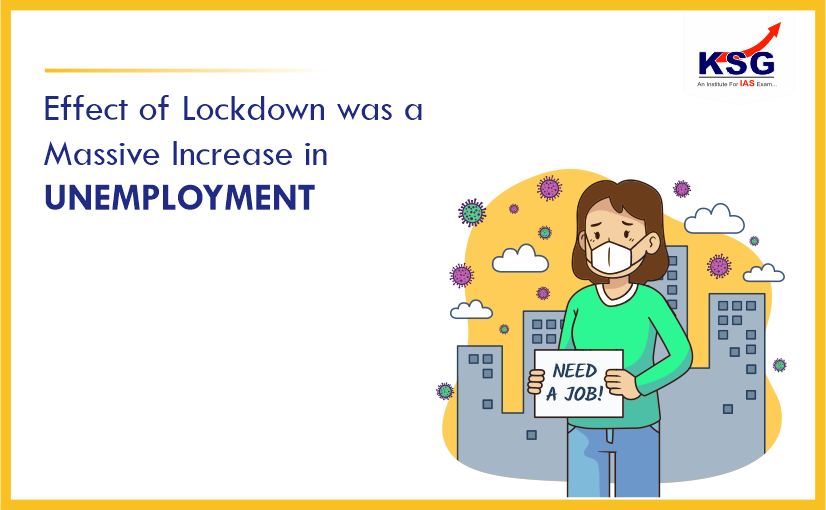 Effect of lockdown - a massive increase in Unemployment

India has implemented one of the world's strictest lockdowns to control the Covid-19 outbreak. This resulted in an almost complete shutdown in April 2020 of all economic activity, with gradual and partial lifting of restrictions throughout the month of May. The apparent consequence of this shutdown was a huge rise in joblessness.

India launched hard airport screenings for the coronavirus (COVID-19), after recording the first case in the southern state of Kerala in late January 2020. The following weeks saw a rapid succession of events leading to a suspension by March 22 of all travels within and outside the region. That same day, the prime minister called for a 14-hour Janata Curfew, which some called a trial-run for the lockdown that was implemented later that week. While infections during this period continued to increase, Indians were now confined to their homes to contain the spread of the virus. The announcement came not without confusion – It has caused widespread panic, especially among the lower classes of society, including farmers and migrant workers left stranded and unemployed overnight from their remote homes, with no mode of transportation. Despite the government announcing a 1.7 trillion rupee relief package, it was clear that a large portion of the country's population would be scouring for livelihoods. It was planned that increased funding from state governments and non-governmental organizations would expand the assistance scope. This included the provision of free daily food in some areas.

It was also projected that the country could bounce back rapidly due to the structure of its industry, with unorganized markets leading in large part. Losses from coordinated sectors in late March amounted to an estimated nine trillion rupees, expected to rise as the lockdown continued. It is not surprising that the industries most affected included services and manufacturing, specifically travel & tourism, financial services, mining and construction, with declining rates between April and June 2020 of up to 23 per cent.
The pandemic has come with confusion and consequences around the globe on all facets of industry. Despite the fact that India is ahead of most countries in being able to enforce work-from - home initiatives, particularly in the area of white collar employment, job and earning shortfall, along with price volatility. The months of the lockdown resulted in the free fall of employment, which slowly stabilized after the economy reopened in late May in most parts of the country. After zone segmentation of districts, research showed that the worst affected areas included orange and red zones (districts with higher numbers of COVID-19 infections), and largely the urban economy. Maharashtra, Tamil Nadu and Gujarat were estimated to have the steepest decline in GSDP (Gross State Domestic Product India) at an average of 15 percent for the following year. However, it depended on how long they could ride out the storm. Overall, the pandemic changed daily lifestyles drastically.

Increased Unemployment due to COVID-19:

A damaging impact on an economy at large as India’s caused due a total lockdown was expected.

Unemployment-and the possibility of unemployment-is leaving people unhappy. Over the past couple of months, there has been plenty of speculation about whether the lockdown was good for wellness levels, but the evidence from the survey and economic literature suggests it has not. The analysis of this calculation between the different groups indicates that there are gender and caste inequalities in early lockdown-induced work losses, where women suffered comparatively more than men (rural women, not urban women) and Dalits (Scheduled Castes). The highest relative loss has been experienced by the employment of rural women. The gender and caste first work loss measurements. In the pre-lockdown year overall employment for men was higher than for men, and in the first month of the lockdown more men lost jobs than women. Nonetheless, despite the pre-existing differences, we can equate the number of people working in April to the average for the prior year to get a sense of relative losses.

Let's just begin with the obvious. The rise in unemployment in April was larger than anything seen during the collapse of the Indian economy during the Great Depression, which took several years to unfold. Inevitably once a decision has been taken to shut down businesses to stop the spread of the Covid-19 virus, layoffs are hitting the poorest workers the hardest. One employee at the bottom of 20 percent of employees was four times more likely than someone at the top of 20 percent last month to lose employment. As in India, it is easier to close companies throughout the country than to reopen them. Today, the number of airline passengers is 7 percent of last year's level; in states where restaurants reopened for service, the number of customers is around 10 percent of its pre-pandemic rate. The number of weekly unemployment claims has dropped from its peak, but continues to increase more than 3 million.

7 million youth in the age group of 20-30 years lost jobs in April. According to the CMIE weekly report, the unemployment rate fell from 27.1%to 24% for the week ended May 10 while the labour participation rate rose from 36.2% to 37.6% as the government opens up industries in a staggered manner. Employment rate also rose from 26.4%to 28.6%. CMIE Consumer Pyramids Household Survey data indicate that young people aged 20–24 accounted for 11% of work losers while 8.5% were working in the country as a whole during 2019–2010.  Around 35 million Women and teenagers were working in 2019-20 and by April 2020 decreased to around 21million.

CMIE is of the view that job loss of 27 million youngsters in their 20s will have serious long-term effects. “They will have to compete with the new cohorts joining the labour force after them, for fewer jobs,” it said, adding young India will not be able to build the savings it will require later in life.

As of the end of April, Pondicherry in South India had the highest number of unemployment at 75.8%, followed by neighbouring:

India's unemployment rate remained steady at 23.5% in May 2020, according to a survey conducted by the Centre for Monitoring Indian Economy (CMIE). This was not a significant deviation from unemployment numbers in the previous month.

India’s economy has “suffered even more than the most” as a result of the lockdown (The Economist, 2020). Over the past six years, India's growth rate has plummeted, decelerating annually since 2016, to 3.1 percent in the first quarter of 2020 (January to March), just before the Covid-19 pandemic struck India. Research shows that, in addition to increasing youth unemployment, pre-existing gender and caste differences are likely to be exacerbated if the particular disadvantage contours are not understood and discussed.