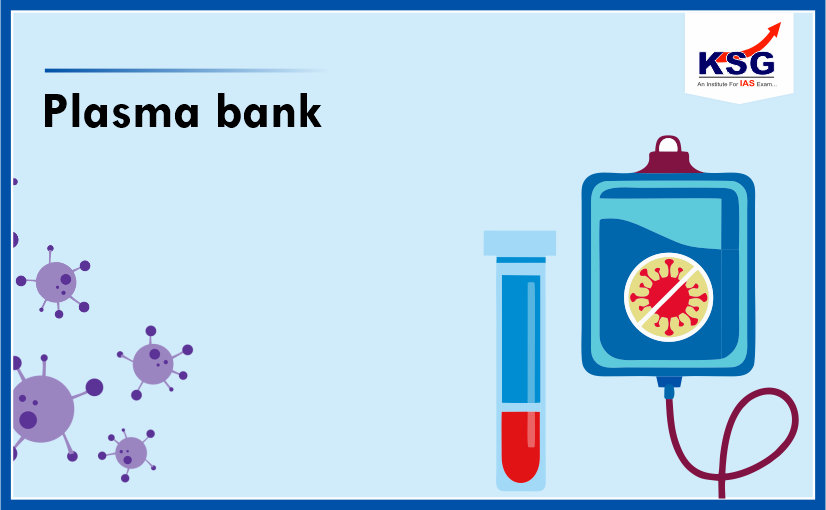 What is a plasma bank?

Convalescent plasma therapy is an experimental treatment for patients with severe coronavirus disease (Covid-19). It is being used as a trial since no drug has been proved effective for treating Covid-19 till date.

It is similar to a blood bank and stores plasma received from the persons who have recovered from Covid-19.

The aim is to put in place an effective system to facilitate an easy access to plasma for persons who are advised plasma therapy by doctors. It also encourages plasma donation by recovered persons to help others undergoing treatment for Covid-19.

India’s first plasma bank is established at the Institute of Liver and Biliary Sciences, Delhi.

How does Plasma therapy work?

People who have recovered from Covid-19 have antibodies (proteins that body uses to fight against infections) to the disease in their blood. Blood contains Red blood cells, white blood cells, platelets and a liquid portion called plasma.

In plasma donation, only the liquid portion of the blood, plasma is extracted from a patient who has recovered from Covid-19 and the remaining blood components are given back to the body. It is known as convalescent plasma and is rich in antibodies. It is then administered to the Covid-19 patient to enable him/her to acquire passive immunization. Because it takes a few weeks for antibodies to form, the hope is that transfusing someone else’s antibodies could help patients fight the virus before their immune system kicks in.

Who can be the donor?

A healthy person, aged between 18-60 years, recovered from Covid-19 at least two weeks before donation could be a donor. He/she should be tested negative for Covid-19 twice before donating plasma. Persons with co-morbidities and women who have given birth recently cannot be donors.

Who is administered Plasma?

Convalescent Plasma therapy is used to treat patients who develop acute respiratory distress and do not respond to treatment. It can also help people who have weak immune system and chronic medical conditions like heart disease and diabetes.

It can also be considered for those who have been exposed to the disease like health care workers and their family members.

The risk from receiving convalescent plasma therapy hasn't been tested yet for COVID-19 infection. But researchers believe that the risk is very low because the plasma donor has fully recovered from the infection.

The risk of these infections is very low, because donated blood must meet certain requirements outlined by the ICMR. Before donated blood can be used, it must be tested for safety. It then under goes a process to separate out blood cells, after that the remaining is plasma with antibodies.

Results of the trial:

How is plasma donation different from blood donation?

Unlike blood donation which is donated once in three months, whereas plasma can be donated every two weeks of just 500 ml. In this therapy, only the plasma is drawn from the blood and the remaining components are returned back to the body.

Other states which have established plasma bank:

West Bengal has set up the country’s second Plasma Bank and also the Maharashtra government has launched Project Platina, for plasma therapy trial for treatment of corona virus patients. All critical patients will receive two doses of 200 ml convalescent plasma free of cost.

Several other states like Punjab, Kerala and Assam are also are running trials to see the efficacy of plasma therapy in the recovery of corona virus positive patients.