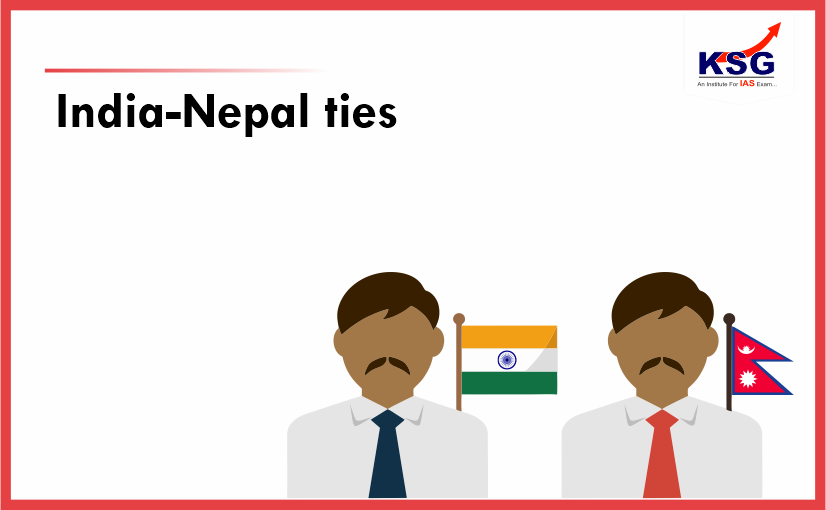 India and Nepal share a unique and time-tested relationship, that is characterised by common heritage, culture, civilisation, history and geography. Nepal shares its border with five states of India, and it is characterised by open border and strong people-to-people ties. The treaty of Peace and Friendship of 1950 between India and Nepal stands as the strong foundation for the special ties between the neighbours. However, over the recent years, this special relationship has seen a steady erosion, and this is a serious concern for India.

The Treaty of Peace and Friendship grants special privileges to Nepali Citizens at par with the Indians, which has enabled Nepal to overcome the challenges of being a land-locked country. India has always been supportive for the cause of political stabilization in Nepal and has welcomed the roadmap laid down by the Comprehensive Peace Agreement of 2006. Several development projects in Nepal in the area of health, education, infrastructure, etc. are supported by India. India is also the largest trading partner of Nepal and both the countries carry out joint military exercise Surya Kiran regularly.

The recent strain in the relationship between the two countries can be attributed to the border dispute over Kalapani-Limpiyadhura-Lipulekh trijunction between India, Nepal and China and Susta area (Bihar). On June 13, 2020, the parliament of Nepal voted unanimously to amend the Constitution in order to redraw the country’s new political map, laying claim over the strategically important areas of Lipulekh, Kalapani and Limpiyadhura along the India border.

The Kalapani territory falls under the Indian administration (Pithoragarh district of Uttarakhand) and serves as an observation post for India. The territory represents the basin of Kali river. The valley of Kalapani, with the Lipulekh Pass at the top forms the route to Kailash-Manasarovar, an ancient pilgrimage site. It is also the traditional trading route for the Bhotiyas of Uttarakhand. The Treaty of Sugauli between Kingdom of Nepal and British India in 1816 mentioned Kali river as Nepal’s western boundary with India. Kalapani territory is claimed by Nepal since 1998 and recently it has released maps to support its claim that all the area up to Kuti Yangti river, including Kalapani, Lipulekh and Limpiyadhura, measuring around 335 sq. Km as part of Nepal’s Darchula district. Nepal has also contended that the Kalapani territory was given to India as a temporary arrangement by King Mahendra after the 1962 Indo-China war and is not a permanent part of Indian territory.

India refused these claims by saying that the Kali river originates well below the Lipulekh Pass and the administrative records of India from 19th century show that Kalapani is considered as part of the territory of Uttarakhand. Joint Technical Level Boundary Working Group set up in 1980s by both nations failed to demarcate Kalapani and Susta area, adding to the discrepancies.

The tensions between the countries can be traced back to 2015 when India was blamed for perceived interference in the drafting of the constitution of Nepal, followed by the perceived blockade by India that caused widespread resentment against India in Nepal to the extent that Nepali nationalism is considered synonymous with anti-Indian feeling.

In recent years, while India has made its Neighbourhood as its first priority, a more serious concern has been that of growing influence of China in Nepal as the former is expanding its footprint in South Asia. While Chinese investments in Nepal have steadily increased, India is perceived as a hegemon with the Nepali leaders triggering the nationalist sentiments of Nepalis. India, too on its part has long ignored the changing political narrative in Nepal and the anti-Indian stance of its leaders.

Nepal has a key strategic relevance for India in terms of its internal security and a friendly, trustworthy Nepal is indispensable in the wake of the recent faceoff with China. Erosion of the bedrock of special relationship is detrimental for both the countries. Both sides must be sensitive as they reset the ‘special bond’ and India needs to be more generous in dealing with Nepal as we proclaim a ‘Neighbourhood First’ policy. Any discussion over the dispute should also taken into account the shifting of the Himalayan rivers and other ecological concerns.